The following article by Steve Brandt was published in the March 26, 2016 issue of the Star Tribune. 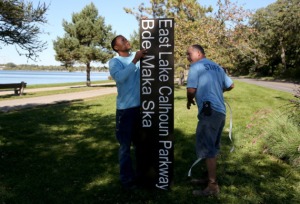 An advisory group on Tuesday overwhelmingly urged the Minneapolis Park and Recreation Board to support restoring the name of Lake Calhoun to the Dakota Bde Maka Ska.

The proposal to delete Calhoun’s name originally arose from the 19th century politician’s outspoken advocacy for slavery in the American south. But native American activists added momentum to the push, citing Calhoun’s policy of forced relocation of southeastern tribes. They say the issue is restoring a Dakota name in use when whites arrived in the area.

The proposal has aroused widespread debate. Opponents of changing a long-used name argue that applying present-day attitudes to historical figures is a slippery slope. They also contend that the Dakota  name is hard to pronounce.

The following article by Eric Roper was published in the March 26, 2016 edition of the Star Tribune.

Minneapolis Mayor Betsy Hodges said Friday the city should commit an additional $30 million for 10 years to close projected funding shortfalls for roads and parks — and raise taxes to pay for it.

She released a basic outline of the $300 million plan with City Council Member John Quincy on Friday. It would mean boosting the city’s levy — the dollar amount it collects in taxes — 1.4 percent more per year than the previously forecast average of 3.5 percent.

The proposal comes days after Hodges vetoed another plan to fund needed park improvements over 20 years by largely relying on funding sources within the city’s existing budget, including pension savings. Hodges said those sources are too unpredictable for the long-term commitment.

Here is the statement given by Arlene Fried, co-founder of Park Watch, during the Lake Calhoun-Harriet CAC meeting on March 24, 2016.

I am in support of retaining the name Lake Calhoun.

It is important to understand that the lakes in the Minneapolis Park system are not only lakes; they are also assets–valuable assets.  And they are branded assets.

Lake Calhoun is a brand and there is immeasurable value in its name.  Tourists from all over the world visit our lakes and recognize their names.

As custodians of all of the assets in our esteemed park system, it is our Park Board commissioners’  fiduciary responsibility as commissioners to protect and preserve these assets; and that means protecting and preserving our lakes and the names attached to them.

The following article by Eric Best, dated March 25, 2016, was published in the Southwest Journal.

Mayor Betsy Hodges and Council Member John Quincy unveiled Friday a $300 million capital investment program that they say would cover two-thirds of the funding gaps for the city’s neighborhood parks and streets.

The proposed plan would allocate an additional $10 million for neighborhood parks and $20 million for street repairs annually over the next ten years. It’s based on a roughly 1.4 percent increase to the city’s property tax levy each year over the next decade on top of the city’s forecasted average of 3.5 percent.
END_OF_DOCUMENT_TOKEN_TO_BE_REPLACED

The following article by Steve Brandt was published in the March 23, 2016 edition of the Star Tribune.

Minneapolis Mayor Betsy Hodges on Tuesday vetoed a Park and Recreation Board resolution favoring an alternative plan for financing neighborhood park needs, citing concerns over the sustainability of funding and lack of public notice for the proposal.

The Park Board is expected to override the veto when it meets on April 6. Traditionally it does that to assert the board’s semi-independence.

The plan would boost neighborhood park funding by $11 million annually for 20 years, mostly to repair or replace buildings and outdoor facilities, but also to increase maintenance.

To continue reading click on the link to the Star Tribune

The following article by Peter Callaghan was published in the March 23,2016 issue of MinnPost.

Parks and Wreck: How a ‘Historic’ Funding Deal Sums up the Long-troubled Relationship Between Minneapolis and its Parks Board

The Park Board is looking for funding to update and renovate neighborhood parks and recreation centers.

When it came time for her to vote, the president of the Minneapolis Park & Recreation Board wanted to make clear where she stood.

“HELL, yes,” said Liz Wielinski after her name was called.

And with that, the board was unanimous in endorsing a 20-year deal with the city of Minneapolis to provide money to repair and restore 157 neighborhood parks and facilities.
If the City Council follows next month — something that is likely but not yet a certainty — the park board will stop work on a voter referendum that would have sought an annual increase in property taxes to cover the price of the initiative, which it had dubbed “Closing The Gap.”

To continue reading, click on the link to MinnPost
https://www.minnpost.com/politics-policy/2016/03/parks-and-wreck-how-historic-funding-deal-sums-long-troubled-relationship-be

The following article by Janet Moore was published in the March 20, 2016 edition of the
Star Tribune.

“It’s a real moment of truth,” said Adam Duininck, chairman of the Metropolitan
Council, builder of the transit line, said of the stark deadline for the Southwest light
rail line.

The controversial Southwest light-rail line has one more shot at funding from the Minnesota Legislature this year, this time under a stark deadline that could put the whole $1.79 billion project in jeopardy.

“It’s a real moment of truth,” said Adam Duininck, chairman of the Metropolitan Council, builder of the transit line.

The Met Council must coax $135 million from lawmakers during the short legislative session this spring to qualify for federal matching funds of $895 million. Without that state match, the 14.5-mile line linking downtown Minneapolis to Eden Prairie could be imperiled — after about $118.5 million in local money already has been spent on it.

The following article by Eric Best, dated March 18, 2016, was published in the Southwest Journal.

Two veteran City Council members are proposing to allocate a mix of existing city funding sources as an alternative to a fall referendum that would raise money for maintaining neighborhood parks.

City Council President Barb Johnson (Ward 4) and Council Member Lisa Goodman (Ward 7) revealed the new plan March 16 that would guarantee, by city ordinance, about $13.5 million annually from various sources for the Minneapolis Park and Recreation Board to fix aging neighborhood parks, many of which face disrepair.

The option comes as the Minneapolis Park and Recreation Board has been campaigning for more than a year around a referendum that would raise roughly $15 million per year for the next 20 years to close a growing $111 million gap to repair neighborhood park assets like wading pools and recreation centers.

Park Superintendent Jayne Miller said the plan, which received its first approval from park commissioners on March 16, would bring together the historically separate government agencies.