The following article by Lee Schafer was published in the January 26, 2016 edition of the Star Tribune.

Why is the Downtown East Commons Park Such a Tough Sell? 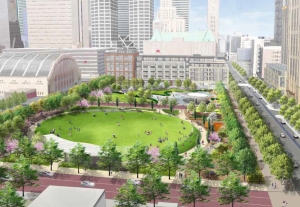 Hargreaves Associates and the City of Minneapolis

It’s going to take $22 million in donated money to fully realize the plan for the Downtown East Commons park, envisioned as the kind of civic jewel that should inspire the generosity of the corporate community.

There are enough Fortune 500 public companies in the state, along with giants like privately held Cargill and Ireland-based Medtronic, that a million bucks from each would wrap up this campaign pretty quickly.

Well, that was wishful thinking.

The organization in charge of the fundraising for the Downtown East Commons, called Green Minneapolis, this month announced that it had raised not quite half of what’s needed to complete the project, including some money for operations. And some of the more ambitious features of the park’s design have been put on hold.

Why is the Downtown East Commons park such a tough sell?