The following article by Eric Best was published in the November 5, 2015 edition of the Southwest Journal. 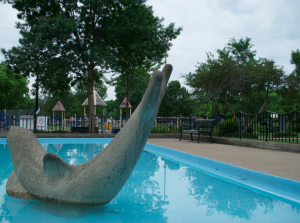 Bryan Square Park is one of several neighborhood parks with expired facilities due to budget shortfalls.

Superintendent Jayne Miller is proposing a $71 million 2016 budget for the Minneapolis Park
and Recreation Board based on a 4.4 percent increase to its property tax levy.

The budget is up about $2.7 million or 4 percent from last year’s approved budget. Next year, 8
cents of every Minneapolis property tax dollar will go to the Park Board.

In September the Board of Estimate and Taxation set the board’s maximum property tax levy at $54.3 million, a 4.4 percent increase. It includes a .4 percent increase or about $1.7 million for the Tree Preservation & Reforestation Fund, a special fund to address tree loss across the park system. Miller’s recommended budget also includes $8.3 million for the board’s enterprise operating fund and $21.8 million for capital projects.

The budget proposal comes as the board prepares to close a $111 million gap in neighborhood park funding, which is expected to grow by $46 million by 2020 at current funding levels. While Miller and other park officials have looked for other options, the most likely solution before the board would be a referendum for a property tax levy in 2016 or 2017.

“We don’t have the funds to maintain our facilities,” Miller told the City Council’s Budget Subcommittee Nov. 3. “Most of our facilities are way past their life cycle, and we are patching them.”

“Despite significant budget reductions, efficiency improvements, and expansion of creative revenue generating opportunities, rising costs and increased park usage continue to strain our ability to meet all of the demands placed on the park system,” Miller explained in a statement.

“Couple the operational pressures with the continued under-funding of park capital infrastructure; the MPRB has reached a critical juncture requiring significant attention to address the gap between available resources and the demand on and needs of the park system.”

Park commissioners will take up the budget in December.

One major change in the proposed budget is staffing, which will see roughly eight new additions under the superintendent’s budget.

The Park Board proactively let go of 136 full-time positions, cutting nearly a fourth of its workforce between 2003 and 2012, some of which went too far, Miller told commissioners during their October meeting. Since 2013 the board has added 28 full-time employees under Miller’s leadership.

Golf has been a major issue for the board since a spring 2014 storm flooded the Hiawatha and Meadowbrook Golf Courses. The superintendent’s budget includes maintenance for Meadowbrook while it’s restored next year. A nine-hole Hiawatha is expected to be open next year.

Miller plans to move away from a flat price for all the courses, introducing tiered costs based on course quality, location and the customer base. Price increases for a round of golf range from $1 to $4 per round.

To address a number of budget shortfalls for older projects, the superintendent is also shifting 2016 capital levy projects one year and the funding sources for several capital projects. The board is not proposing new projects in 2021.

The delays mean that projects like the roughly $5.4 million Phillips Community Center swimming pool renovation, set to get more than $660,000 in diverted money in Miller’s budget, will get funding. The superintendent is also proposing to cover the remaining costs of the Neiman Sports Complex at Fort Snelling, which had been funded by the board’s Enterprise Fund — its business activities like parking lots and event rentals — since 1998. Other funds will instead go toward cost overruns at parks like $20,000 for Bethune Park’s wading pool.

Miller also plans to reduce tree planting from 8,500 trees to 8,050, or about 5 percent. She told commissioners this is necessary to keep up with the pruning cycle.

The superintendent’s recommended budget is also the first to include funds from a park dedication fee from new construction projects that started last year. Several parks would get park dedications dollars, such as $4,600 for Bethune, $3,042 for Folwell, $12,900 for Matthews and $3,900 for Phelps.

A PDF of the recommended 2016 budget can be found here or at www.minneapolisparks.org/budget.