The following article by Dylan Thomas was published on August 27, 2014, in Southwest Journal’s on-line addition. 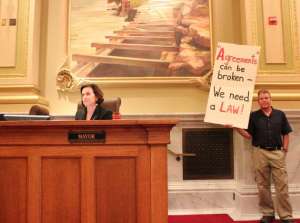 Council members Cam Gordon and Blong Yang dissented on the 4–2 committee vote, with Gordon describing himself as “conflicted” — mostly in favor of the third addition to the region’s growing light rail network but still concerned that a study of its potential environmental impact on Minneapolis lakes and groundwater won’t be complete for months. The full council vote on Friday is the last step in winning local approvals for the project.

The committee also unanimously approved a memorandum of understanding with Metropolitan Council that may have been the lynchpin in winning city support for Southwest LRT. That agreement, reached in July after closed door negotiations between city and Met Council leaders, eliminated one of two tunnels planed for Minneapolis’ Kenilworth Corridor and directs half the savings, totaling $30 million, toward improvements for Minneapolis’ portion of the 16-mile LRT line.

In a special meeting of the full City Council convened immediately after the committee votes, council members unanimously approved actions intended to preserve public ownership of the land underlying freight rail tracks through the Kenilworth Corridor. The memoranda of understanding with the Met Council and Hennepin County Regional Railroad Authority aim to limit the chances Twin Cities and Western or any other railroad can ever run more trains or a more dangerous mix of freight through the corridor.

Ward 7 Council Member Lisa Goodman was among the “yes” votes on the memoranda, even though she plans to vote “no” on municipal consent for Southwest LRT on Friday. Goodman said the agreements gave the city a “tiny” bit of leverage to prevent an even worse outcome for Kenilworth Corridor.

Minneapolis leaders had for years said they would not support adding light rail to the Kenilworth Corridor without first rerouting the freight trains that use the corridor daily. But Minneapolis backed down under what Goodman described as “tremendous” pressure from the state, county and four suburban cities on the line.

Describing herself as the “canary in the minefield,” Goodman warned there was still a possibility — especially without prior environmental review — that a Kenilworth Corridor tunnel wouldn’t be built because of environmental or engineering complications. That would result in the worst possible outcome for Minneapolis: co-location of freight and light rail trains at-grade, potentially requiring the removal of homes near the line and almost certainly eliminating a popular bike and pedestrian trail that runs through the Kenilworth Corridor.

Minneapolis officials have said that kind of change would be significant enough to, in their view, require the project to go through another round of municipal consent, with Minneapolis potentially withdrawing its support.

Some have argued the Met Council is violating state law by moving ahead with municipal consent before the supplementary draft environmental impact statement, or SDEIS, on the current version of the Kenilworth Corridor tunnel plan is completed in January. The Lakes and Parks Alliance of Minneapolis, made up of mainly of homeowners living close to the corridor, has threatened to sue.

Goodman said it was telling Minneapolis City Attorney Susan Segal hadn’t issued a legal opinion on the matter. Asked to comment on the matter by Council Member Yang, Segal said the council faced a deadline to vote on municipal consent, but “whether or not environmental review is required prior to consent is an issue that may well ultimately be decided by the courts.”

In case the SDEIS does indicate a shallow Kenilworth Corridor could seriously impact the Chain of Lakes or Minneapolis groundwater, city staff was directed by committee members to take “very serious action including legal action that would stop the Southwest light rail train in order to protect our environmental assets,” said Council Member Lisa Bender.

The committee approved a second staff direction to have city staff to meet with local transit advocates and develop a firm plan by September to improve transit equity throughout the region and make better links to the future LRT line. Both supporters and detractors have noted the promise of connecting low-income urban residents with suburban employment and job opportunities is contingent on improving access to the line, which will run through a relatively unpopulated section of the city.