The following editorial was published in the August 18, 2014 issue of the StarTribune

Park Watch Note: The link (embedded in the below editorial) to the highlighted February Use “agreement” brings up the December Term Sheet–and not the February Use Agreement.

Despite Confusion, Minneapolis Moves Ahead On ‘The Yard’ 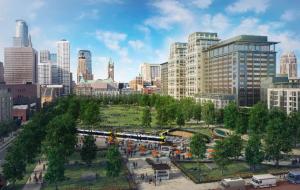 Nothing seems to come easily to Minneapolis. That includes “The Yard,” a two-block green space intended to become the centerpiece of a budding Downtown East district. While a new Vikings stadium and the rest of the neighborhood rises amid forests of construction cranes, the Yard’s future is clouded by “governance issues.”

The Park Board’s decision earlier this month to withdraw from the project appeared, at first glance, to dump the whole matter back into City Hall’s lap, leaving it with the convoluted task of financing and completing the project. Some civic leaders took that as good news, seeing suddenly a clearer, more direct path toward forging the public/private effort needed to expand green space downtown, starting with the Yard.

But, while rejecting the project, the Park Board also reminded the city of a District Court judge’s observation last December that only the Park Board has the authority to own and manage public parks in Minneapolis. What was that all about? Was it a not-so-veiled threat that if the Park Board can’t own and manage the Yard under terms that it likes, then no one else can?

Park Board President Liz Wielinski answered the question this way: “The City Charter clearly states that only the Park Board can own and operate parks — but this may not qualify as a park.”

That appears to leave the city two options: Recast the park as a “plaza,” or assume that the Park Board’s passing on the project gives it the authority to go ahead with the original plan. Either way, the court may have to further clarify which government body can and can’t own and operate parks — or plazas — in Minneapolis.

This seems like a silly semantic dispute and a reflection, perhaps, of years of bad blood between City Hall and park headquarters and, perhaps, a bit of revenge against the city’s earlier attempt to sidestep the Park Board on this particular project. But, in turning down the Yard, the Park Board uncovered serious flaws in the use agreement aimed at governing its operations. Those flaws should stoke public concern.

The agreement, signed in February by the city and by Ryan Cos., the project developer, gives the Minnesota Sports Facilities Authority and its prime tenant, the Vikings, exclusive and rent-free use of all or part of the park for dates that conceivably could cover nearly every warm-weather weekend of the year. That arrangement severely limits any park operator from hosting its own events, or drawing revenue from those events.

It is, in the traditional way of running parks, an unsustainable model. And it’s a sweetheart deal that violates the spirit of open and spontaneous access to what’s usually thought of as a public park. In that sense, the Park Board was right to walk away from the project.

But another angle seems also to bolster the board’s decision, one that the board didn’t fully discuss. And that’s that the Yard is part of something far bigger — a dramatic conversion of the downtown core into a green, walkable place with leafy sidewalks, a new Nicollet Mall and several high-profile plazas. It is, in other words, the start of a major public/private effort that doesn’t fit neatly into anything the Park Board has ever done. The board’s focus for more than 100 years has been neighborhood parks and regional assets like the Chain of Lakes, and it has done a stellar job on that. But proper downtown greening poses a significant step up that requires a level of design, service and attention that the Park Board cannot meet on its own. Chicago’s Magnificent Mile and Millennium Park, for example, and New York’s Bryant Park have raised expectations considerably for what competitive downtowns must now provide.

As in those and other downtowns, the task of green conversion falls largely to public/private conservancies designed specifically to fund, manage and maintain high-intensity green spaces that require constant attention. That’s the model that Minneapolis must pursue in its downtown core, starting with the Yard.

At a City Hall meeting on Thursday, the outline of a solution began to emerge. The Downtown Council announced that it has taken first steps in launching a greening conservancy. In addition, the city’s economic development agency said it will seek design proposals for the Yard beginning next month and proceed with an accelerated construction schedule beginning early next year even though the financial plans for developing and maintaining the park haven’t yet been settled.

Despite that, and despite a thick layer of ambiguity about who can own and operate parks in Minneapolis, and about whether the Yard is really a park in the usual sense, the city is charging full steam ahead. Given the tight time line it faces, that’s the right direction.