The following article by Pat Doyle was published in the June 13, 2014 issue of the StarTribune. 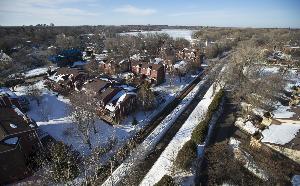 Minneapolis has yet to schedule a public hearing. The four other cities along the future light-rail route have already held hearings — a step required before cities can vote on the plans within the next month.

As deadlines loom for the $1.68 billion Southwest Corridor light-rail project, concern is growing that Minneapolis hasn’t scheduled a public hearing needed to move it forward.

The four other cities along the future light-rail route have already held hearings — a step required before cities can vote on the plans within the next month.

Hopkins City Council Member Cheryl Youakim said she’d like assurances that Minneapolis will hold a hearing soon “so we can keep the project on track.” At a recent gathering of metro leaders, Eden Prairie Mayor Nancy Tyra-Lukens also questioned a Minneapolis official about the city’s plans for a hearing.

The Metropolitan Council, the agency overseeing the project, has cited state law in setting a July 14 deadline for a vote on the project by the cities and Hennepin County. A spokeswoman for Minneapolis Mayor Betsy Hodges said this week that the city will hold a hearing in time to meet the deadline for that vote on whether to grant consent.

“I’m not sure why one hasn’t been scheduled,” said spokeswoman Kate Brickman.

The concerns are heightened by the fact that the Minneapolis City Council earlier this year came out against plans for the project, siding with homeowners in the Kenilworth corridor neighborhood who opposed running the light rail in tunnels near their homes and existing freight train tracks. Members of the City Council and the Met Council are now negotiating a possible compromise with a retired judge acting as a mediator.

“The timetable for the city’s review and action on that consent is entirely the responsibility of Minneapolis officials,” said Matt Swenson, press secretary for Gov. Mark Dayton. “However, the governor believes public hearings are critically important to allow Minneapolis residents to present their views on the decision.”

Minnetonka Mayor Terry Schneider said assurances by Minneapolis that it will hold a hearing by July 14 stopped short of satisfying suburban officials supporting the plan.

“I would have liked to [know] what the exact process is,” Schneider said. “Everybody would be more comfortable if they knew everything was falling into place.”

The Southwest is the most expensive transit project in the Twin Cities. The state and local governments have already spent $30 million on it, with most coming from five metro counties that use special sales taxes to bankroll transit. That group last winter set its own June 30 deadline for the cities and Hennepin County to agree on Southwest plans or risk losing future funding to other transit projects. The group is expected next week to extend its deadline to July 14 because plans went to the cities later than anticipated.

The Southwest project has been delayed nearly a year over disputes with Minneapolis and St. Louis Park, which opposed an alternate plan to reroute freight trains in its community.

The Minneapolis City Council is being urged to push forward with the Southwest line by labor unions, a key DFL constituency.

“It may not be the line you like, but it’s the next step,” said Dan McConnell, business manager for Minneapolis Building and Construction Trades Council. “We can probably put some ornaments on the Christmas tree … but this is kind of the deal.”

The Southwest plan also has the support of the city’s downtown business interests, who see the line as a plus for the local economy. Their leaders have recently met with Hodges and council members to make their case for the project.

“I certainly felt like the response from the mayor, as recently as yesterday, and council members we visited with, was, ‘We’ve got our concerns, but we recognize the importance of finding a solution,’?” Steve Cramer, president of the Minneapolis Downtown Council, said Wednesday.

“So I walked away from those meetings feeling encouraged about the ultimate outcome,” Cramer said.

Others ready to vote

Hopkins, Minnetonka, St. Louis Park and Eden Prairie officials have set dates for voting on the Southwest plan and, unlike Minneapolis, have given preliminary approval.

But final approval of the plan may come with a wish list of suggested modifications.

Schneider said Minnetonka might ask the Met Council to consider spending money to buffer noise and vibration where the line runs close to multifamily housing.

“We’re not making it a condition that it has to move,” he said of the route. “The whole system is more important than that one negative impact.”

Eden Prairie public works director Robert Ellis said his city may also approve the basic plan with a wish list of extras that could be financed with any contingency funding that isn’t needed elsewhere on the project.

“We’ve got maybe six or seven items we’d like to see included in the project costs if there’s funding available,” he said. They include connecting a road to a station and having two platforms straddling tracks rather than one platform between them.

Under state law, the cities could take a tougher stance, rejecting the Southwest plan and amending it with necessary conditions. But that strategy could trigger a new round of discussions and votes that could further delay or torpedo the project.

Some Minneapolis officials and community groups would like to see better bus access to Southwest stations near the city’s North Side.

Another possible source of a deal involves the desire of some Minneapolis city officials to build streetcar lines.

“Mayor Hodges has always talked about streetcars as one of her big initiatives,” Brickman, the mayor’s communications director, said this week. “We have heard rumors of the Met Council wanting to use streetcars as a bargaining chip.” The Met Council declined to comment on the assertion.

Brickman declined to comment on whether Hodges has made streetcars a condition of the city supporting Southwest, citing the ongoing mediation sessions between Met Council members, city officials and retired federal Chief Magistrate Judge Arthur Boylan. “Our guiding principle is respect for the confidentiality of mediation,” she said.