The following article by Pat Doyle was published in the April 23, 2014 edition of the StarTribune. The original article, with any associated images and links, can be viewed at http://www.startribune.com/permalink/256227061.html 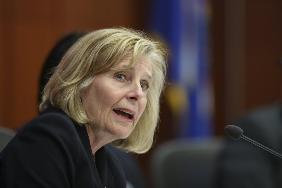 Planners of the Twin Cities’ biggest transit project sent Minneapolis a different design for tunnels than the one approved by metro leaders two weeks ago, delaying the city’s review past a key deadline.

The Metropolitan Council, the agency overseeing the $1.68 billion Southwest Corridor project, sent the city a design that shows one of two light-rail tunnels in the Kenilworth corridor being built in berms rising as high as 13 feet above the existing ground level, an element not included on designs previously made public.

City officials challenged the elevated design, which would likely prompt more objections from nearby residents already upset with the Southwest project.

Met Council Chairwoman Susan Haigh called the changes an error by her staff and directed it to “rescind and replace” the altered version with the one the agency approved earlier.

“I found out about it … and said, ‘Whoa, that’s not what we agreed to. You need to resubmit the plans that we actually agreed to,’?” Haigh said Tuesday.

On Tuesday her agency sent the approved design to Minneapolis.

The two-week delay in sending the proper plans could extend the city review process to July 14. A board of Twin Cities counties that bankrolls metro transportation projects has threatened to shift the funds elsewhere if the Southwest project doesn’t win the consent of Minneapolis and four other cities by June 30.

“If the thing is on a path to get done … we’ll be reasonable,” said Hennepin County Commissioner Peter McLaughlin, chairman of the funding board.

The Met Council staff sent out the version of the design now called incorrect on April 10, the day after the agency approved a Southwest plan without the higher tunnels.

The Southwest project includes nearly a mile of underground tunnels north and south of a water channel linking Lake of the Isles and Cedar Lake. Recreational trails are intended to be built on top of the tunnels.

Project planners offered the tunnels in an attempt to satisfy some nearby residents concerned about light-rail trains running at ground level near freight trains and the recreational trails.

The tunnel south of the channel didn’t change in the erroneous design sent two weeks ago to the city, remaining below existing ground level.

While Haigh said the discarded north tunnel design was a mistake by Met Council staffers, Minneapolis officials aren’t so sure.

They said city staffers reviewing the Southwest plan last week noticed the higher elevations at some points on the north tunnel. The tunnel berms would have been mostly 5 to 6 feet higher than the trails at ground level and rose to 12 to 13 feet in some places. City officials said when they asked some Met Council Southwest project staffers about the new berms, they defended them.

“Metropolitan Council staff have indicated that the new design is intended to keep the LRT enclosure above the water table,” City Attorney Susan Segal said. “This is also inconsistent with previous representations.”

Haigh said she has been assured by her engineers that the tunnel berm isn’t needed to deal with the water table.

“I asked, is the design … voted on by the Met Council, does that design continue to be a good, safe, efficient design?” she said. “The answer I got was, of course, yes.”

She attributed the revised berm designs to staff members experimenting with different ideas.

“I think engineers are always looking for a different design and new approach,” Haigh said. “I can only assume that’s what they were doing.”

Other Met Council members, political appointees of the governor whose role is to set policies that are implemented by the council’s staff, said Tuesday they were unaware that their staff had sent a design to the city that included higher elevations for the north tunnel in some places or that the design was justified as dealing with the water table.

“I do not know why, and I wasn’t very happy when I found out,” Council Member Adam Duininck said. “It feels to me it was done without our direction and … without my knowing.”

Duininck also said he’s confident that a tunnel could be built safely north of the channel without the berms.

The tunnel surprise could further complicate talks between the Met Council and Minneapolis on whether it will approve the project, which has been opposed by the City Council and Mayor Betsy Hodges. They objected to the earlier tunnel design and pushed to reroute freight train traffic from the corridor.

During nearly a year of give-and-take with Met Council officials, city officials and some residents of the Kenilworth corridor have expressed concerns that the agency would change plans to something even less appealing to them.