The following article by Bill McAuliffe and Tom Meersman was published in the February 1, 2014 issue of the Star Tribune:

Mpls. Park Board to seek study of LRT tunnel under Kenilworth channel

Mpls. Park Board wants more information on option under channel. 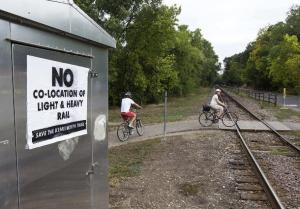 The Minneapolis Park and Recreation Board is expected to ask the Metropolitan Council next week for a new study of a different tunnel option for Southwest Corridor light-rail trains through a part of Minneapolis where current plans have collided with stiff opposition from city officials, neighbors and the park board.

The request would come just after the Met Council released a draft study by an independent consultant that concluded that shallow tunnels would have minimal impact on lakes, water quality and groundwater flow near the area, known as the Kenilworth Corridor.

That study, presented in draft form Thursday, looked at a pair of half-mile, shallow tunnels for light rail along the corridor that would “daylight” briefly above ground on a bridge to cross over the channel linking Cedar Lake and Lake of the Isles.

However, parks superintendent Jayne Miller said Metropolitan Council planners have not adequately addressed the option of a longer, 1.4 mile-long light-rail tunnel under the channel, which would leave aboveground conditions similar to what they are now.

The board resolution would ask the Met Council to conduct a detailed engineering feasibility study and cost comparison of tunneling under the channel.

“We need to make a decision with a full deck of cards here,” said parks Commissioner Anita Tabb, who represents the area. “It’s important for us to be talking about this sooner rather than later.”

Parks officials have opposed the up-and-over-the-bridge plan for light rail as disruptive to parkland that has been nominated for inclusion on the National Register of Historic Places. It would double the width of the existing bridge over the channel.

The channel and a current bridge are heavily used by kayakers, canoeists and bicyclists, with occasional slow freight trains running next to recreational trails.

The Park Board posted the resolution seeking the tunnel study Friday on the agenda for its regular meeting Wednesday. Tabb said she expects the full board to approve it.

In August the Park Board went on record opposing the location of freight, light rail and recreational trails all in the Kenilworth Corridor, particularly with the shallow-tunnel option. Tabb said the board is being pragmatic in seeking to examine the combination of shallow tunnels and a dive under the channel.

“We’re trying to make the best decisions on the route we’ve been given,” she said.

The $1.5 billion proposed light-rail line, the metro area’s most expensive to date, would feature 17 new stations along 15.8 miles from Target Field in downtown Minneapolis through St. Louis Park, Hopkins and Minnetonka to Eden Prairie.

By state law, all five communities along the line have to agree to a design.

The issue of tunnels along the Kenilworth Corridor in Minneapolis is one option for how to proceed with the light-rail project. Another is to reroute freight trains from the area to St. Louis Park, freeing up space in the corridor for the light rail to run at ground level instead of needing to construct tunnels.

That reroute option, strongly opposed by St. Louis Park officials, is back on the table after another independent study released last week concluded that some of the suburb’s concerns about increased train traffic, noise and safety can be allayed by a different design, grading and engineering. St. Louis Park officials said they do not agree and that all reroute options have been unworkable.

City, county and Met Council planners will examine the freight train study findings in the weeks to come, and will hold public meetings on Feb. 10 in Minneapolis and Feb. 12 in St. Louis Park to hear what the public thinks.

Parks superintendent Miller said that under federal provisions, transportation projects cannot go through park land or historic sites if a feasible alternative can be found. She said the park board and federal authorities, including the Department of the Interior and the Federal Transportation Administration, will make those determinations.

Metropolitan Council Chair Susan Haigh said she hopes the council, with the support of other project funders and the consent of affected communities, can make a decision on whether to tunnel or reroute by March 30.