The following article by Pat Doyle was published October 3, 2013 in the Star Tribune: 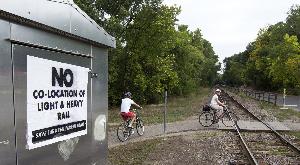 Facing blistering criticism from Minneapolis, metro leaders backed away Wednesday from approving a plan to spend more than $100 million to hide the Southwest Corridor light-rail line in tunnels through a recreation area in the city.

The hesitation will give the panel of metro mayors and county officials another week to consider ways to soften opposition from Minneapolis officials, who say the plan violates past promises and who fear being double-crossed in the future.

Wednesday’s decision pushes back a crucial vote by the leaders until next week and will delay an even more pivotal vote by the Metropolitan Council, the agency overseeing the project, until at least mid-October. But Met Council Chairwoman Susan Haigh said after the meeting that metro leaders seemed to support the plan for the tunnels.

Several suburban officials spoke Wednesday in favor of the plan, which appeared on the verge of approval before a Minneapolis official bitterly denounced the process that produced it.

“For the city of Minneapolis, this product … flunks the fairness test,” said Peter Wagenius, a transportation policy aide to Minneapolis Mayor R.T. Rybak. Wagenius also said the plan lacked transparency, drawing applause from some in the crowd attending the meeting.

Hennepin County Commissioner Peter McLaughlin suggested that the panel take a week to study the plan, which was revealed Tuesday night by Met Council staff, and modify it to allay some of Minneapolis’ concerns.

“What kind of language would be reassuring to them?” he asked afterward.

Haigh supported the delay, and the panel approved it, with St. Louis Park among the minority wanting to forge ahead. That suburb would be a winner because the plan eliminates the need to reroute freight train traffic from Minneapolis to St. Louis Park, an option opposed by some of its residents.

The two tunnels in the plan were intended to quiet critics and buy political support for the project. But they are opposed by some Minneapolis residents who complain that the light-rail trains would be above ground for too long in the wooded Kenilworth corridor, an affluent area popular with bicyclists.

Minneapolis officials also worry that one or both tunnels could be eliminated if the project runs into demands for budget cuts while advancing through the Met Council and the Legislature. The light-rail trains would then run at ground level for a much longer distance through the Kenilworth corridor.

Haigh told metro leaders Wednesday that the Met Council would be committed to two tunnels, but Wagenius said planners broke a promise in the 1990s to reroute the freight rail traffic to St. Louis Park if Minneapolis accepted light-rail in the Kenilworth corridor. The option was dropped amid resistance from the suburb and a railroad, which deny that they ever committed to a reroute.

“This project suffers from a failure to factor in freight,” Wagenius said. “There was the failure to get a binding agreement from either St. Louis Park or the railroads 17 years ago.”

He accused Haigh of backing away from a recent vow to have consultants explore new freight reroute possibilities. The idea was dropped after consultants funded by the railroad industry said they had a conflict of interest in conducting a study.

McLaughlin countered, “There were promises made 17 years ago. But the world’s changed since then.”

“We are in a box,” he said. “But if you are going to make real progress in a region you’ve got to make hard choices.”

He said postponing a decision would allow time to craft stronger language in the plan for the two tunnels to address some of Minneapolis’ fears. “Some kind of assurances, I think, need to be made … more stronger assurances … than are reflected in the language we have before us,” he said.

The support of Minneapolis and the other four cities along the future route is important because state law requires the Met Council to seek the consent of each. If any refuses, the project could be delayed or jeopardized.

After the meeting, McLaughlin said Minneapolis might be given a written assurance that it would have a second chance to approve or reject the plan if it changed after the city granted its consent.

The recommendation from Met Council staff calls for digging the two 1.4-mile-long tunnels next to existing freight rail and bike trails in the Kenilworth corridor at a cost of $160 million. It rejects rerouting the freight trains onto berms in St. Louis Park at a cost of $200 million.

The tunnels and other cost increases would bring the estimated price of the Southwest Corridor light rail to $1.56 billion, up from an earlier estimate of $1.25 billion.

The tunnels would allow room for the existing freight rail traffic and recreational trails to run alongside each other without the need to remove homes or businesses, as would happen to 30 properties in St. Louis Park if the freight lines were rerouted there.

The light-rail trains would emerge from the tunnels for about 1,000 feet to cross a bridge spanning a channel between Lake of the Isles and Cedar Lake. About 220 light-rail trains daily would each spend about 20 seconds above ground or above water near the channel.

But some nearby residents say the tunnels would allow trains to be seen and heard for too long in the corridor, and they have collected money to finance a lawsuit to block the plan. The Minneapolis Park and Recreation Board, which exercises rights to some property in the corridor, also has threatened legal action.